How to Play Apple Music on Fitbit Ionic

-- I don't have any personal songs anymore and rely on my Apple Music subscription for music. Is it possible to sync some Apple Music songs to my Fitbit Ionic? How can I do that?

-- Can I transfer a playlist from my Apple Music subscription via iTunes to the Fitbit? I got my ionic on Thursday, pre ordered specifically because of the music storage option. Struggled with numerous issues to get it to sync and then I get the error message, encrypted file, can't transfer.

-- I get my music from Apple Music. Will the Ionic be able to support the Apple Music app???

In the world of predominantly circular smartwatches, the Apple Watch and now Fitbit Ionic stand out by offering square designs. Even so, the Fitbit Ionic’s design remains divisive, especially against the now-established Apple Watch design that’s in its third generation. But it’s a comfortable wearable undoubtedly, even when on your wrist in bed or during exercise. Fitbit Ionic features a new Relative SPO2 sensor, which can detect your blood oxygen levels. Besides, its fitness and sports tracking including the Coach platform make a really good impression and smartwatch features like notifications and Fitbit Pay work without issue. The Ionic also provides music player support with 2.5 GB music storage, which will allow you to store 300+ songs for enjoying. 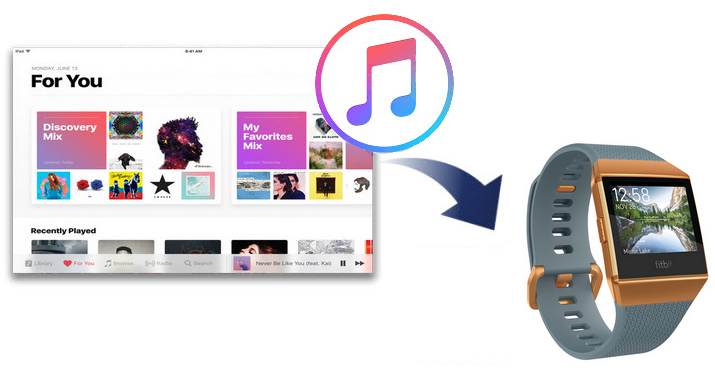 The Ionic is launching with a handful of first-party apps but only four third-party offerings: Strava, AccuWeather, Starbucks and Pandora. That last one won't apply to you if you're in Europe. So if you want to play Apple Music on the Fitbit Ionic, the best way is to convert Apple Music songs to plain MP3 format.

Tutorial: How to Transfer Apple Music to Fitbit Ionic

The following is the detailed tutorial to guide you to convert Apple Music to MP3 and transfer to Fitbit Ionic. Please download NoteBurner Apple Music Converter first before getting started.

After converting, the output folder will be open automatically. Or you can click the History button on the top-right interface to find the converted music. Then simply connect to your computer or your mobile via Wi-Fi and use the Fitbit Connect app to transfer the converted Apple Music songs to Ionic to enjoying without needing your phone nearby.