Anyone know if playlists created in Apple Music will sync for offline use on an iPod Classic or Nano?

With the explosion of smartphone, the dedicated music player was pretty much rendered irrelevant. But it doesn’t means that these music players are completely useless for people. Actually, in today's world a portable player is a simple supplement for your phone, an accessory for uninterrupted listening of music or podcasts during a commute, workout or leisure time. However, things in life don't always go smoothly. It's really saddening for some Apple Music subscribers to find out that all their attempts to sync and play songs or playlist from Apple Music on tiny iPod Classic will be killed by the popup message "Apple Music songs cannot be copied to an iPod". Yes, Apple blocks the way to sync Apple Music songs or playlist on iPod Classic by adding music protection into their songs. So if you own a version of iPod Classic, and long to play Apple Music playlist on it, you will need to record Apple Music firstly. 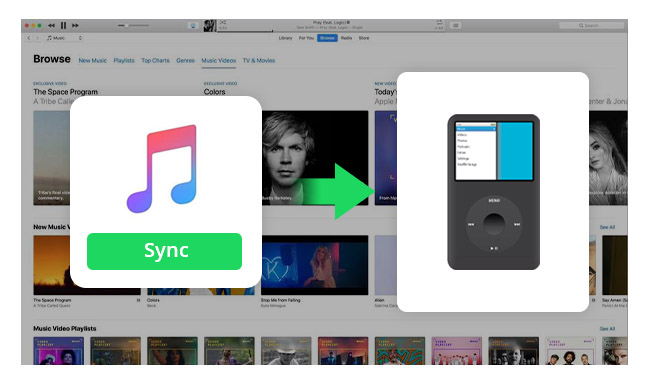 To record Apple Music playlist and sync them to iPod Classic, here we strongly recommend NoteBurner Apple Music to iPod Converter, which is a smart Apple Music converter that is designed to record and convert the music tracks from M4P to common MP3, FLAC, AAC, AIFF, WAV, or ALAC audio formats with original CD quality preserved. By recording Apple Music songs with this powerful Apple Musis Converter, Apple Music users can freely transfer the unprotected Apple Music songs to any device to enjoy, including iPod or other MP3 player.

Tutorial: How to Transfer Apple Music to iPod Classic or Nano

The following is the detailed tutorial to guide you to convert Apple Music and sync songs from Apple Music to iPod Classic. Please download NoteBurner Apple Music Converter first before getting started.

Click the button "+ Add" to add music, it will pop up a window, which will show you all of the songs you have downloaded from Apple Music. Or you can also directly drag & drop the music from iTunes / Music app to NoteBurner. You can choose any song you want to convert.

After completing the above steps, the final one is clicking the button "Convert". Just a few second, it will succeed. After converting, the output folder will be open automatically. Or you can click the "Converted" button on the left side to find the converted music. Now all of Apple Music songs are free to use, you can sync them to your iPod via iTunes for enjoying.