How to Convert Apple Music to AIFF Format

As one of the mainstream music formats, AIFF uses PCM (Pulse Code Modulation) to encode audio waveforms as accurate samples to provide the highest sound quality. It also reserves data in uncompressed and lossless format, which means the songs reserved in AIFF format will keep the original data without any quality loss, and get pure sound effects. With these obvious benefits, the AIFF format has become the default choice for music editors and DJs when they need to convert Apple Music into an uncompressed AIFF format.

As mentioned above, music editors and DJs often need to process original wave files when editing and mixing audio files in DJ software, and they prefer to choose an uncompressed format like AIFF. However, it’s a pity that the leading streaming music platform, Apple Music, does not provide an option to download or transfer its music files to AIFF format. That really causes inconvenience to Apple Music users who’d like to transfer and listen to lossless quality music with AIFF. Now here comes a simple tool called NoteBurner iTunes Audio Converter which intends to fix such kind of problem. This powerful tool makes it much easier to convert Apple Music to AIFF with just a few clicks. After conversion, you can transfer the lossless Apple Music to any other device or software supported by AIFF format and enjoy them freely. 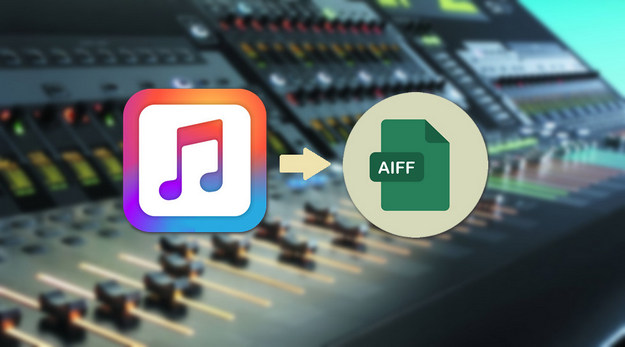 NoteBurner iTunes Audio Converter is an all-in-one Apple Music, audiobook, and M4P downloader and converter. Featured with a user-friendly interface and fast conversion speed, it can easily record Apple Music to AIFF/MP3/AAC/WAV/FLAC format. After conversion, you can transfer your Apple Music to any devices for listening offline. Furthermore, it is capable of keeping ID3 tags information (title, artist, album, artwork, track number, disc number, year, comment, genre, AlbumArtist, composer), which also can be edited as you like.

Before getting started, the first and most important thing is to install NoteBurner iTunes Audio Converter on your computer.

Tutorial: How to Convert Apple Music to AIFF

NoteBurner iTunes Audio Converter supports both Windows and macOS operating systems. Here we take the Windows version as an example to show you how to convert Apple Music to AIFF.

Note: If you are a Mac user, please turn to How to Save Apple Music on Mac for more details.

Launch NoteBurner iTunes Audio Converter then click "+ Add" in the middle of the screen, a window with all your songs in iTunes Library will show up. Choose the songs you would like to convert, then click "OK".

Tap the "Settings" button on the upper right of NoteBurner and then you will be able to customize the Output Path, Output Format ( including MP3, AAC, FLAC, WAV, AIFF, ALAC), Output Quality, Output File Name, etc. Choose AIFF as the output format. Click the "Convert" button to start converting the songs you chose before. After a few mins, they will be saved to the output folder that you customized in the previous step.

After the conversion is finished, you can click the "Converted" tab on the left to check the converted playlist in AIFF format. Or you can also find them in the output path.

Above all, you don’t have to worry about the limits of Apple Music anymore. Now we have a professional program named NoteBurner iTunes Audio Converter, which is easy to convert Apple Music to AIFF format with lossless quality kept. It also supports preserving ID3 information tags after conversion. What’s more, the converted Apple Music is capable of transferring to any devices as you need and freely listening offline.

Last but not least, the free trial version of iTunes Audio Converter supports converting the first 3 min of each Apple Music song. Except for the basic feature of converting and downloading Apple Music, it can also burn converted music to CD directly. No matter you are a DJ or a music editor who needs to burn music to CD with zero quality loss, NoteBurner is your best choice. With all of these features above, why not have a try?