An Easy Way to Play Apple Music on Android TV

An Android TV device is either a set-top box or dongle which plugs into your television. You can use the box to play thousands of songs, movies & shows, and games from Google Play and your favorite apps. At various times, Sharp, Sony, AirTV and Hisense have all used Android TV OS to power their TVs’ smart capabilities. Generally, you can easily cast movies, shows, and music from phone to your Android TV with Chromecast built-in. However, since all contents from Apple Music are protected and there is no built-in Apple Music app added to Android TV, in which case you can’t directly transfer Apple Music songs to Android TV devices for listening. 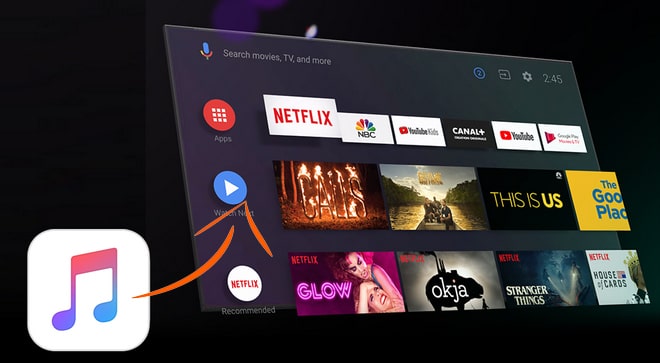 Since Apple Music contents are locked, so if you want to transfer them to non-Apple-selected devices like Android TV, the first and foremost step is to download them as common local files by applying to a mighty Apple Music converter. Here NoteBurner Apple Music Converter is highly recommended. It is a professional music converting tool for iTunes and Apple Music users, capable of converting Apple Music tunes, iTunes M4P music, and audiobooks to MP3, FLAC, AAC, AIFF, WAV, or ALAC format with lossless quality kept. With the help of such a smart tool, you can download your favorite songs from Apple Music as local files and import them to Android TV for enjoying.

The following is the detailed tutorial to guide you to convert Apple Music as MP3 files and import to Android TV devices. Please download NoteBurner Apple Music Converter first before getting started.

Click the button "+ Add" to add music, it will pop up a window, which will show you all of the songs you have downloaded from Apple Music. Or you can also directly drag & drop the music from iTunes / Music app to NoteBurner. You can choose any song you want to convert.

After converting, the output folder will be open automatically. Or you can click the "Converted" button on the left side of the interface to find the converted music.

Now all of the songs from Apple Music are normal MP3 files, you can transfer them to USB drive, and then plug the USB drive into your Android TV box. After that, you can navigate the Apple Music and choose a music player for playback on you Andoird TV.