How to Play Apple Music with Alexa

Apple Music first arrived at the Echo in December 2018 in the US. After months of work, it is also available in other five countries, including the United Kingdom, Ireland, Australia, New Zealand, and Japan. Before this significant update, Apple Music users had to either connect to Amazon Echo devices with Bluetooth or shell out $350 for a HomePod for playing their Apple Music songs on a smart speaker. But now, Apple Music subscribers who live in these countries are able to directly ask Alexa to play artists, songs and albums from Apple Music on Amazon Echo speakers. The process of setting up Apple Music with Alexa is really easy, it only takes 30 seconds. Below we will show you how to do it.

Step 1 Open the Alexa app on your phone, and then tap the Menu button in the upper-left corner. 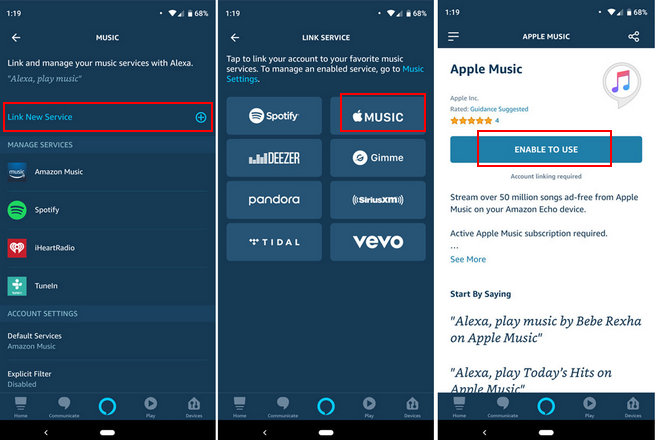 Done. You can now say phrases such as "Hey Alexa, play Taylor Swift on Apple Music" to listen.

If you don’t want to say "on Apple Music" each time you ask Alexa to play something, it’s time to make Apple Music the default service on Alexa. Here are the detailed steps.

Step 1 Open the Amazon Alexa app, and then tap the menu button Menu button in the upper-left corner.

Step 3 Scroll down to the bottom under "Account Settings" and tap "Default Services". 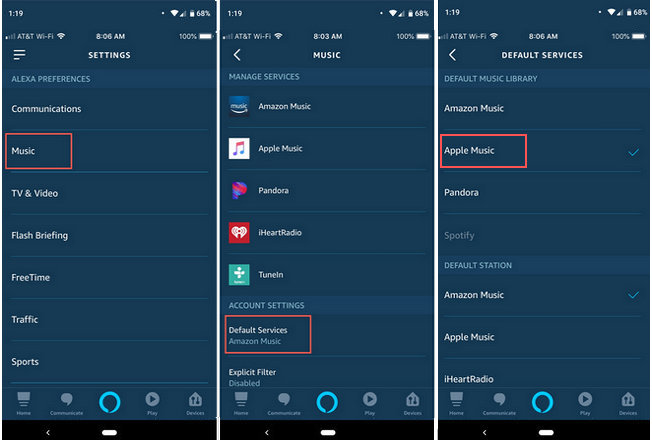 That’s it. Now you can ask Alexa to play tunes right from Apple Music.

Tips: How to Keep Apple Music Playable after Cancelling Subscription

Apple Music is a rental service. Though you paid for the service and downloaded its tracks to your devices within the subscription, you don’t actually own them. Once the subscription ends, you’ll lose access to all of the songs. So if you want to keep the downloaded songs from Apple Music forever, the best way is to convert them to common MP3 format with a Apple Music converting tool.

Here NoteBurner Apple Music Converter is highly recommended. It is a mighty music converting tool for iTunes and Apple Music users, capable of converting Apple Music tunes, iTunes M4P music, and audiobooks to MP3, FLAC, AAC, AIFF, WAV, or ALAC format with lossless quality kept. With the help of such a smart tool, you can keep your favorite songs from Apple Music on your devices and enjoy them even though your subscription is over.

The following is the detailed tutorial to guide you to convert Apple Music to MP3. Please download NoteBurner Apple Music Converter first before getting started.

Click the button "+ Add" to add music, it will pop up a window, which will show you all of the songs you have downloaded from Apple Music. You can choose any song you want to convert.

After converting, the output folder will be open automatically. Or you can click the "Converted" button on the left side to find the converted music. Now all of the songs from Apple Music are normal MP3 files, you can keep them on your devices and enjoy anywhere anytime.