"Apple Music supports SD cards on Android. What about iPhone? I have an iPhone with 16GB memory and wondering whether there is a way to download my Apple Music to an SD card so I can run my apps normally. Is there any method to do that?"

Apple updated its Apple Music app for Android users in 2016, adding a new feature that allows them to save downloaded songs to an SD card on compatible smartphones, but not for iOS users. In this way, it seems that Android users can potentially have access to more music than iOS users who are limited to a maximum of 128GB of storage on iPhones and iPads. But actually, iOS users can also move Apple Music to SD card. 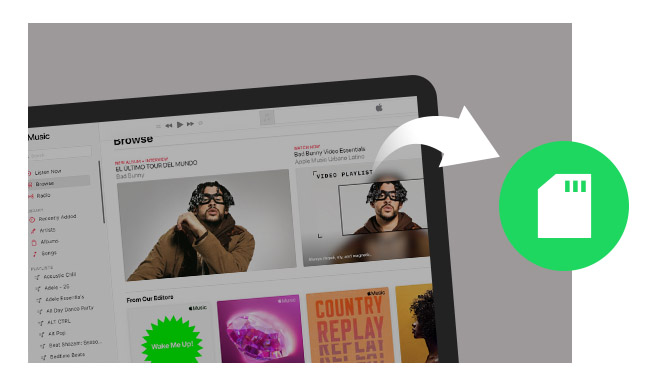 Method 1. Save Apple Music to SD Card (For Android)

Here is a detailed guide on how to save Apple Music to SD card, benefiting by the updated feature of Apple Music App for Android.

Step 3 Accept the prompt when asked if you want to move all of your currently downloaded music, along with any future music to your SD card. 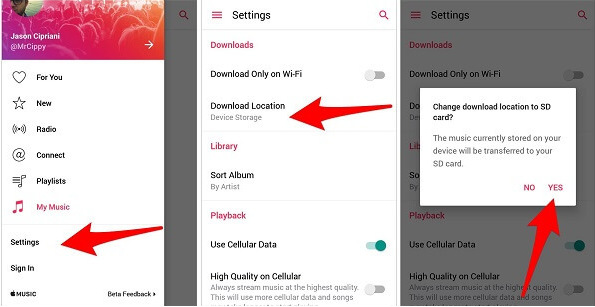 As we all know, Apple Music is a streaming music service offering protected songs, for which we are limited to listen to Apple Music tracks on iTunes or with Apple Music App. But the following part is going to break it through and get rid of its' limitation.

Method 2. Copy Apple Music to SD Card (For both iOS and Android)

The default setting of Apple Music is to be downloaded to iOS devices, and it’s impossible for iOS users to directly save Apple Music to SD Card. But we may seek for an "agency" to achieve it and the most amazing thing is that the "agency" will not only copy our Apple Music to SD Card, but also enable us to play Apple Music offline with our default media player, which is also suitable for Android users.

Now we are going to guide you on how to move Apple Music to SD card with NoteBurner Apple Music Converter step by step. Before we get started, please make sure you've downloaded and installed the program on your computer (Mac/ Windows). Otherwise, please click on the links below to finish the setup.

Launch the program. Click button "+ Add". A pop-up window will show you all of the songs you've downloaded in your iTunes library. Or you can also directly drag & drop the music from iTunes / Music app to NoteBurner. Choose the songs you like for converting and then press OK. 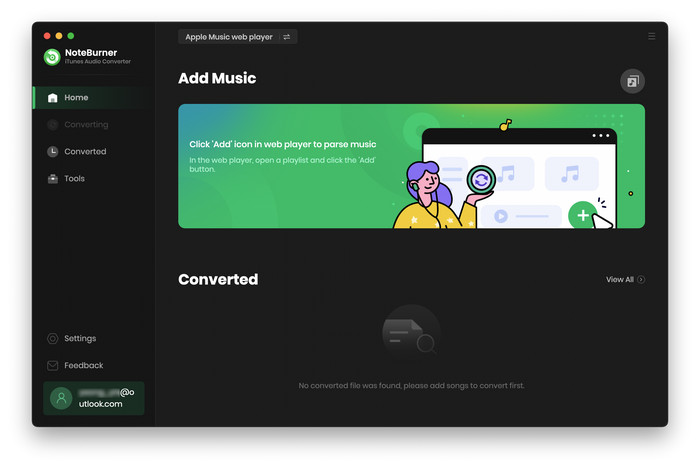 Click the gear button on the upper right of the interface. There will be a pop-up window to allow you to choose output format (MP3/AAC/WAV/FLAC/AIFF/ALAC), output quality, and output path.

Click the button "Convert" and then you will see the progress bar of the conversion. When they are all done, click the menu button (three lines) on the upper right of NoteBurner Apple Music Converter. Here you can find all the converted songs that have been converted successfully.

Now all the songs you get are in MP3/WAV/FLAC/AAC/AIFF/ALAC format. Insert the SD card into your computer's built-in card reader, and locate the folder your saved your converted Apple Music, and then copy and paste them to your SD card. If your computer does not have an SD card adapter slot, you may insert an external SD card reader to help.

Note: The free trial version of NoteBurner Apple Music Converter allows users to convert the first three minutes of each audio file. To unlock the time limitation, we can purchase the full version of the program.