How to Keep Apple Music Songs Playable after Canceling Subscription?


What happens if you unsubscribe from Apple Music?

"Today I was playing my Apple Music on my iPhone that I have downloaded before. But when I try to play, I get a message saying that my Apple Music subscription is expired and I need to renew it to continue listening. I also get the same exact message when I try to download an Apple Music song. I'm perplexed as to why I can't play my music. " 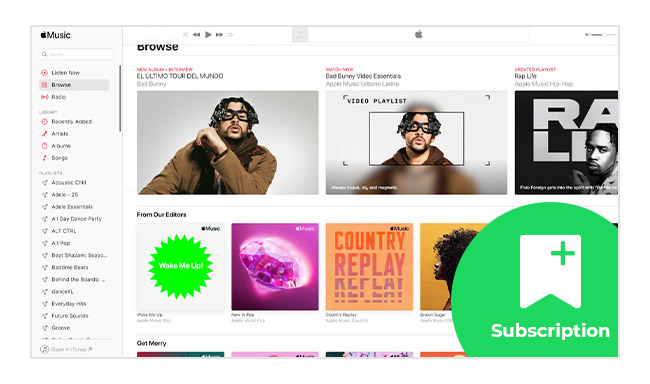 You may also have the same problem as above after canceling subscription from Apple Music. If you unsubscribe from Apple Music, you are no longer able to play any streaming music you've added or downloaded to your library from the Apple Music catalog.

Do Apple Music downloads expire? Unfortunately, yes, they will be disabled when the subscription comes to an end.

Why does this happen? Obviously, Apple has added protection to all its tracks to avoid the situation that users just sign up and download a bunch of songs for offline listening, then cancel the subscription and run away.

How to Keep Apple Music Forever Even After Unsubscribing

NoteBurner Apple Music downloader is 100% safe and clean to use. If you have some tracks in your library, as long as they're playable on iTunes/Apple Music, just drag & drop your audio files to NoteBurner and give it a shot!

Tutorial: How to Download Apple Music and Keep Them Forever?

The following detailed tutorial will take the Mac version as an example to illustrate how to record Apple Music tracks with NoteBurner Apple Music Converter. After following the steps below, your whole Apple Music library can be saved on iPhone, Mac or other devices even after the subscription is closed.

Launch Apple Music Converter on Mac. And then click the "Add" button to add any iTunes music file you want to convert. Or you can also directly drag & drop the music from iTunes / Music app to NoteBurner for parsing.

After adding Apple Music, all your selected audio tracks will be listed in a new window. Then please click the Setting button to customize the output settings, including conversion mode, output format, output quality, output path, and more.

Tips: If you'd like to save your Apple Music tracks into the same folder, just choose "None" on the output organize setting.

Now, all you need to do is to click the "Convert" button to save Apple Music songs to Mac locally. Your music files will be converted with all ID3 tags and metadata kept. Generally, the output folder will be opened automatically once the conversion is completed.

Can I keep my music downloads if I cancel Apple Music? Absolutely yes! By using NoteBurner Apple Music downloader to get your whole music library offline, you will never lose your music downloads, even after the subscription or free trial is closed.