Maroon 5 is a popular American pop band that originated in Los Angeles, California. "Red Pill Bules" is the band’s six studio album, released on November 3rd, 2017. The title of the album comes from the 1999 sci-fi film The Matrix, where hero Neo is offered a choice between a red and blue pill. The red pill would awaken him and bring him back to see the real world, while the blue pill would return him to the blissful ignorance of living in a computer simulation.

However, in recent years, "Red Pills Blue" becomes a popular phrase among men's rights activists, to whom 'red pill' refers to the moment that they were 'awakened' into their current mode of thinking - feminists are evil and women want to be dominated by men. Maroon 5 expressed their regret on naming the album "Red Pill Blues" after realizing the negative connotation of the phrase. But anyway, the band’s new album "Red Pill Blues" is becoming more and more popular among the public. Has once debuted at number two on US Billboard 200, Maroon 5’s "Red Pill Blues" made a hit with 94,000 pure album sales. 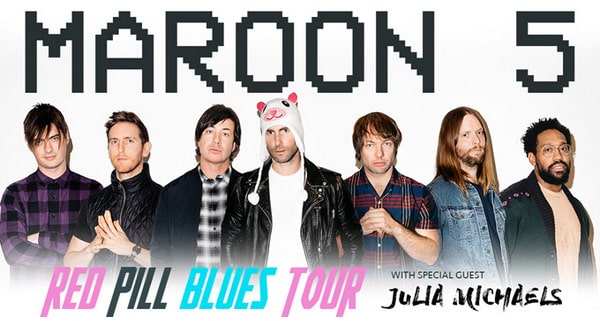 In this article, you will learn how to keep Maroon 5’s album forever by downloading "Red Pill Blues" from Apple Music to MP3 format.

Related Article: How to Download Any Music from Spotify (including Maroon 5’s "Red Pill Blues") to MP3 for Free

Apple Music is a streaming music service and we are confined to listening to Apple songs with iTunes or Apple Music App. To Download Maroon 5’s Album "Red Pill Blues" from Apple Music to MP3, it’s a must to record it. Now let’s explore for more details.

NoteBurner iTunes Audio Converter is a well-received Apple Music Converter specially developed for downloading Apple Music, audiobooks & iTunes M4P Music to MP3, FLAC, AAC, AIFF, WAV, or ALAC format with lossless quality. By applying this music downloader, we can easily download Maroon 5's "Red Pill Blues" full album to MP3 and stream them to any other devices for listening at all times.

The following is the detailed tutorial to help you convert "Red Pill Blues" album on Apple Music to MP3. Please download NoteBurner iTunes Audio Converter first before we get started.

Launch NoteBurner Apple Music Converter. Click "+ Add" on the upper left. There will be a pop-up window showing you all the downloaded songs from iTunes / Apple Music Library. Choose the songs you want to convert (eg: What Lovers Do, Cold, Don't Wanna Know ...) and then press "OK".

Click the button "Convert" and all the selected songs in Maroon 5's "Red Pill Blues" you chose in Step 1 will be converted to MP3 format and downloaded to the output folder you set in previous step.

When the conversion is done, the output folder saving the downloaded album will pop up automatically. Or, you can also click the "Converted" button on the left to find them.