Spotify is one of the largest music streaming services worldwide. According to the official data released from Spotify, there are more than 70 million songs are recorded on Spotify platform, which makes it the most popular music site among other music streaming services. However, no one would be willing to listen to the millions of tracks one by one, quite many users streaming the Spotify music with some custom playlists. A playlist is a collection of tracks, on Spotify, you can create own playlists or find any random one in their millions of playlists created by Spotify itself, artists, or other listeners worldwide.

Did you know that you can download the Spotify playlist to your computer for offline streaming? If you see a very nice playlist on Spotify and have been listening to it every day, you might want to download all songs in it to your personal computer and stream offline or share to other places. Keep reading this article and you will be learning the simplest way to download the Spotify playlist(s) to your computer regardless the number of songs collected in it. 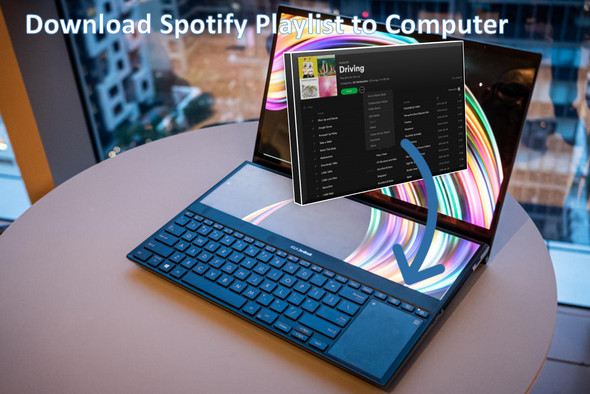 In General, users can only stream Spotify music online. Although Spotify provides the offline mode, it is only available for premium users and the downloaded songs can only be played with Spotify application or player, the songs are not actually downloaded to your computer. But here we have a smart tool to help you achieve with it.

NoteBurner Spotify Music Converter is a professional downloader which is able to record and download Spotify songs/playlists to MP3, AAC, WAV, AIFF, FLAC, or ALAC format, the ID3 tags and 100% lossless quality are kept after conversion. Here are the key features of the program:

NoteBurner Spotify Music Converter supports both Windows and Mac systems. Here we use the Windows version as an example to guide you to the method of downloading Spotify playlist to your computer as MP3, AAC, FLAC, WAV, AIFF, or ALAC format.

1 Add a Spotify playlist to the program

Download and run the NoteBurner Spotify Music Converter. Drag and drop the playlist from Spotify to NoteBurner.

Note: The program is currently set to a maximum of 500 songs for a playlist by default. To import a playlist with more than 500 songs, please open the playlist on Spotify, select all songs in the playlist (just click the first song, scroll down to the last song and press shift+left-click it) and then drag & drop them to the program.

Click the "Settings" button on the upper right. Here you can choose output format (MP3, AAC, FLAC, AIFF, WAV, or ALAC), output quality as well as the output path.

Click the "Convert" button to download the Spotify playlist to your computer. Once the conversion is finished, you can find the songs in the output folder that you set in previous step.

Now you have all songs in a playlist downloaded to your computer. Differ from the Spotify internal offline mode, by this method you can now stream the playlist offline with any player, and add it to DJ or other projects for personal use.

Spotify has a "Made for you" and "Made for everyone" features that you can browse many playlists Spotify makes just for you or for the general public based on your preference and listening habits.

Find the Made for you option on:

If you are new to Spotify service and need some inspiration, here we have some tips for you. Read the article Best 10 Spotify Playlists and Top 10 Hip-Hop Playlists on Spotify, and you will have a better idea to pick the best one for you.

Furthermore, if you have an Apple Music account and subscribed to it, transfer the downloaded Spotify playlist(s) to iTunes would be a good option as well, so that you can mix and stream them together.