Simple Way to Save Album from Spotify to PC

Do you ever get crazy about one pop singer? Take it easy, it is not criticism. Chasing an idol is everybody's right. At the present time, quite a number of young men idolize pop singers and do their best to support the work of their idols. For example, some fans will buy all the albums of the singer; some will not miss any a concert, the others may only support their idols by going to Spotify to stream those albums over and over again.

Why choose Spotify? With over 345 million users, 155 million of which are premium users, Spotify, beyond doubt, is the most shining star in music streaming services. It includes a large library with more than 70 million tracks, from where you easily can find nearly all of the hot hits or even a niche band's EP from your hometown that only released a few years ago. Sure, there are also some limits can't be ignored, of which the most irksome one is you cannot keep the downloaded album from Spotify forever even though you’ve paid for. That’s a huge pain for fans who long to save the albums forever.

If you are a fan who is suffering from the same problem, you are in luck. Just read the following guide, you will get a simple solution to save albums from Spotify to PC permanently. 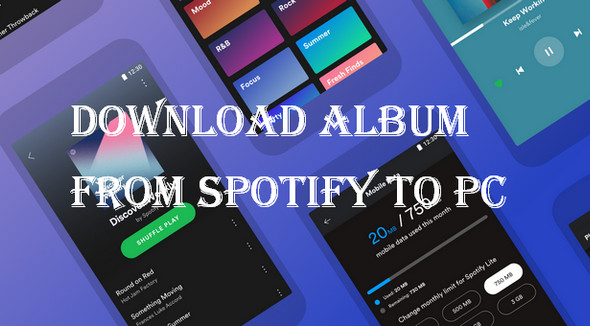 To save albums from Spotify to computer forever, all you need is an effective Spotify album downloader. Here NoteBurner Spotify Music Converter is highly recommended. It is a smart music converting tool for Spotify, integrated with the advanced music recording technology, focusing on helping both Spotify Free and Premium users download any track, playlist or podcast from Spotify and convert them to common formats, including MP3, AAC, WAV, AIFF, FLAC, or ALAC. With such a powerful tool, you can easily download any album from Spotify to computer for saving forever.

Tutorial: How to Download Spotify Album to Computer with NoteBurner

NoteBurner Spotify Music Converter supports both Windows and Mac OS. Here we will take the Windows version as an example to guide you to save albums from Spotify to computer step by step. For Mac users, please turn to Download Spotify Music to Mac for the detailed steps.

Download and install NoteBurner Spotify Music Converter. After it, please launch the software.

Click button "+" or click the center of NoteBurner. There will be a pop-up window prompting you to copy and paste or drag and drop the album link from Spotify to NoteBurner.

Finally, please click the button "Convert". When the conversion is done, all the Spotify songs you selected in Step 2 have already been downloaded and converted into the MP3 format you select in the previous step.

By clicking the Converted button (like a clock) or directly going to the output folder you customized in Step 3, you can find all the converted Spotify songs in MP3 format. Now you can keep those songs on your local drive forever or transfer them to OneDrive for backup.

YouTube Video: How to Save Album from Spotify to PC?